Crossover History Wikia
Register
Don't have an account?
Sign In
Advertisement
in: Characters from the Madness Series, Newgrounds Rumble, Madness,
and 4 more

Hank J. Wimbleton is a character from the Madness series. He is extremely skilled mercenary, and fights against The Agency Against Hank Wimbleton, who have a hold over Nevada. Hank is known for his proficiency with guns, and can slaughter massive groups of enemies quickly.

Appearing no different than a simple Grunt, Hank seeks out to kill the cowardly Sheriff, the main antagonist of the first three episodes. Using his Sheriff Tracker, he finds The Sheriff in his building. The Sheriff frequently fled, attacking Hank only when there was an opening, and preferred letting his guards, including a clown named Tricky, do the majority of striking back. After dispatching the guards, he prepares to shoot The Sheriff. However, Hank is killed by The Sheriff's bodyguard, Jesus, before he could pull the trigger.

He is resurrected, and once again targets the two rivals. During the attack, he is being watched by them, prompting the Sheriff to activate the Improbability Drive, warping the world by distorting the gravity and cutting away parts of the Sheriff's building. On top of that, Hank is being hunted down by Tricky, who knocks him off the building into the street below. He kills more Grunts and finishes off Tricky by impaling him with a stop sign, though Tricky is revived by the Higher Powers. As Hank comes across and kills more Grunts, walls fall around him, trapping him. An undead Tricky then attacks him but Hank shoots him. As he wonders how to leave the room, he is confronted by Jesus, who revives the Grunts as zombies. Hank kills the zombies, but Jesus knocks them into the next room. He gets impaled by Jesus, but manages to kill The Sheriff and Jesus before dying. Revived once more, Hank seeks out to kill Tricky, a reality bending clown who has the ability to bring the dead back to life. In his demonic form, Tricky kills and revives Hank to torture him, but he is given a peaceful death by Jesus. After his death, Hank is revived in a monstrous form by Sanford and Deimos to help them defeat The Auditor, who uses Improbability Drives to keep the world of Nevada in a state of madness.

Newgrounds Rumble-Nothing in Hank's world made sense, so when he found himself surrounded by the fierce inhabitants of the Newgrounds world, he didn't even skip a beat. He just kept doing what he does best.

Hank appears as a playable character in Newgrounds Rumble. He was added to the game in an update to celebrate 2007's Madness Day. Hank's advantages in battle are his ability to consecutively parry attacks and his unique ability in having bidirectional crouch attacks, however, his parries don't stun and his speed is slow overall. He uses a variety of guns from the Madness series in his attacks. In Hank's story, he is transported to Newgrounds and fights to return home. When he first arrives in Newgrounds, Pico attacks him. After killing him, word of his death reaches to Nene. As she had a crush on him, she seeks out Hank. Defeating her, she reveals that a device called The Portal that is capable of transporting anyone in the Flash world, that is guarded by P-Bot. Hank gets transported back to Nevada, where the Henchmen strengthen their numbers. In his ending, Hank realizes that Tricky was behind this, and strives to bring him down once and for all.

Hank, as he appears in Madness Combat. 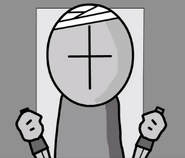 Hank as he appears in Madness Combat 3: Avenger.

Hank, as he appears in Madness Combat 4: Apotheosis.

Hank, as he appears in Madness Combat 5: Depredation.

Hank, as he appears in Newgrounds Rumble.

Jesus with a Desert Eagle in Madness Combat 2: Redeemer.

Hank with a Desert Eagle in Madness Combat 4: Apotheosis. 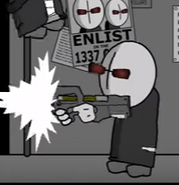 Hank was going to appear as a playable character in Indie Game Battle. The project ended before Hank was a finished character.

Community content is available under CC-BY-SA unless otherwise noted.
Advertisement